“Music of the Fair,” written in 1932, proceeds in one continuous movement that
nevertheless subdivides into sections that correspond to the usual four-movement
quartet structure. After an initial burst of confusion, the first section bustles about, with several ideas being contrasted rather than developed. Here and in the later sections, Revueltas tries out almost all the string-instrument tricks common at that time. Pizzicati add color, and double stops thicken a texture already dense with at least two of the four voices usually enjoying melodic and rhythmic autonomy. A
bridge employing harmonics leads to a slow serenade, the heart of the work. Next comes what would correspond to a spiky scherzo, spiced with Bartókian glissandi. (In fact, this entire ten-minute quartet is the sort of musical postcard Bartók might have written on a light holiday in Mexico, were he prone to such efforts.) Material from the opening section returns, and leads to a frenetic ending. 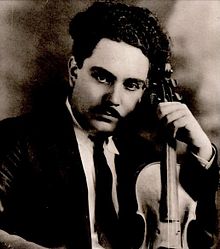