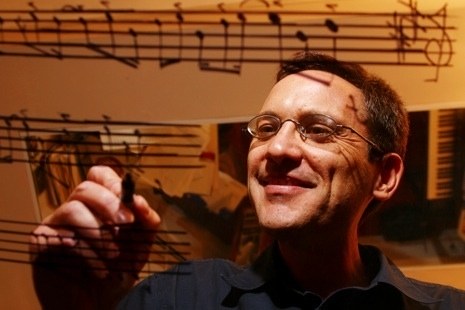 Osvaldo Golijov grew up in an Eastern European Jewish household in La Plata, Argentina. Born to a piano teacher mother and physician father, Golijov was raised surrounded by classical chamber music, Jewish liturgical and klezmer music, and the new tango of Astor Piazzolla. After studying piano at the local conservatory and composition with Gerardo Gandini he moved to Israel in 1983, where he studied with Mark Kopytman at the Jerusalem Rubin Academy and immersed himself in the colliding musical traditions of that city. Upon moving to the United States in 1986, Golijov earned his Ph.D. at the University of Pennsylvania, where he studied with George Crumb, and was a fellow at Tanglewood, studying with Oliver Knussen.

In the early 90’s Golijov began to work closely with two string quartets, the St. Lawrence and the Kronos. Both ensembles were the earliest to project Golijov’s volatile and category-defying style in its true, full form. In 2002, EMI released Yiddishbbuk, a Grammy-nominated CD of Golijov’s chamber music, celebrating ten years of collaboration with the St. Lawrence String Quartet, featuring clarinetist Todd Palmer. The Kronos Quartet released three recordings featuring their collaborations with Golijov: The Dreams and Prayers of Isaac the Blind, featuring David Krakauer, as well as Caravan, and Nuevo. Kronos also expanded Golijov’s musical family through collaborations with artists such as the Romanian Gypsy band Taraf de Haidouks, the Mexican Rock group Café Tacuba, tablas virtuoso Zakir Hussain, and legendary Argentine composer, guitarist and producer Gustavo Santaolalla, with whom Golijov continues to collaborate. For the past decade Golijov has been inspired by the voice of Dawn Upshaw, for whom he composed several works, including the Three Songs for Soprano and Orchestra, the opera Ainadamar, the cycles Ayre and She Was Here, and a number of arrangements.