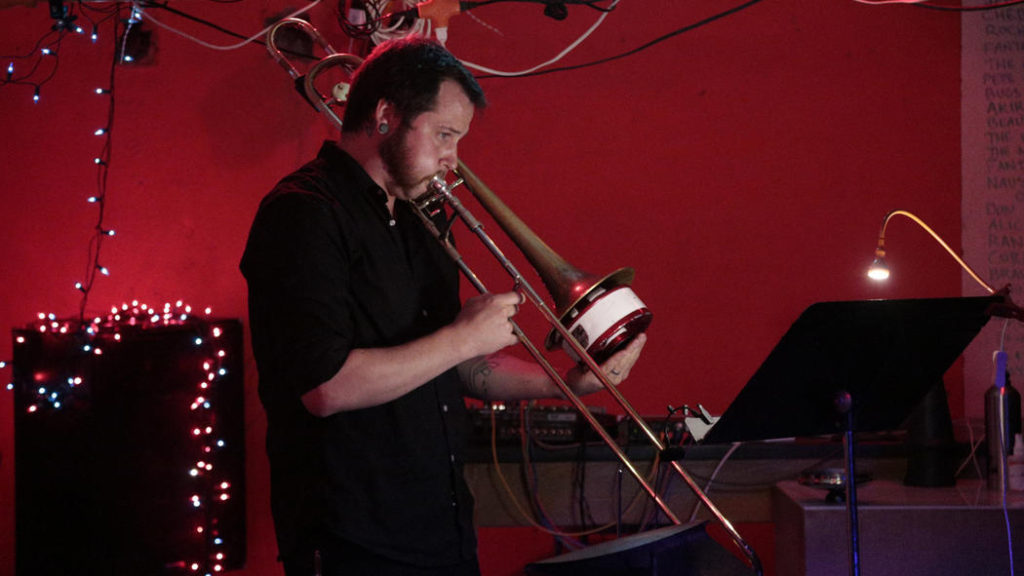 Matt Barbier is an LA based trombonist and composer focused on experimental intonation, noise, and the physical processes of his instrument. His playing has been described by the LA Times as being “of intense, brilliant, virtuosic growling that gave the striking impression that Barbier was dismantling the instrument while playing it,” by the Wire as “exploring the nooks of instrumental tone far beyond the reach of most mortals,” and by the New Yorker as being a “diabolically inventive trombonist-composer.”

To encourage new repertoire and the expansion of his instrument, Matt engages in collaborative relationships with a range of musicians including Wolfgang von Schweinitz, Michelle Lou, David Brynjar Franzson, Kevin Drumm, and Katherine Young. He has also given world premieres of works by a wide spectrum of composers including Liza Lim, Richard Barrett, Catherine Lamb, James Tenney, Jessie Marino, Scott Walker, and Sarah Davachi.

Matt is a founding member of gnarwhallaby, the low brass duo, RAGE Thormbones, Trio Kobayashi, wildUp, and is an assistant director of wasteLAnd music. Matt is a member of the instrumental arts faculty at CalArts and teaches trombone and euphonium at Los Angeles City College (LACC).

As a composer he has written music and created sound installations for the Factory Seconds Brass Trio, WasteLAnd, gnarwhallaby, RAGE Thormbones, the Museum of Jurassic Technology, SASSAS, Machine Project, LACMA, and the Getty Villa, as well as with digital media artist Tom Leeser.