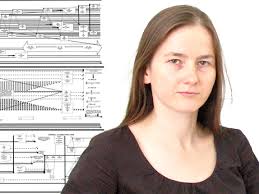 The composer Marina Khorkova lives and works in Moscow/Russia and Berlin/Germany. From 2000 to 2005 she studied composition at the Moscow Conservatory. In 2008 she received a grant by Paul Sacher Stiftung in Basel/Switzerland followed by grants of the DAAD and the Kunststiftung Baden-Württemberg, which allowed her to follow up on her studies of composition by Prof. Caspar Johannes Walter at the Staatliche Hochschule für Musik und Darstellende Kunst Stuttgart, Germany. She was also granted residency fellowships by Villa Aurora Los Angeles, CA/USA and Künstlerhof Schreyhan, Wustrow/Germany.

In 2011 she was granted the Ernst-Krenek-Preis der Stadt Wien at impuls festival in Graz/Austria that was joined to a residency as composer-in-residence in Austria. Her work ALEPH premiered performed by Ensemble Klangforum in the context of the festival steirischer herbst 2012 in Graz. 2013 she was awarded the Kompositionspreis of Staubach Honoria and a grant by the Internationalen Ferienkurse Darmstadt in 2014 on which her work klangNarbe was performed by Enseble Accanto for the first time. Her newest work STREICHQUARTETT will premiere at MicroFest performed by Lyris Quartet in Los Angeles and in the course of the festival Bludenzertage zeitgemäßer Musik, Austria performed by Ensemble soundinitiative in 2015.

Her works have been broadcasted multiple times, such as by Deutschlandfunk, WDR 3 and ORF. In 2013 she was selected by the CD label Wergo for a series of CD’s of the Deutsche Musikrat. The CD will be published in coproduction by Deutschlandfunk in 2016.

In 2015 she is a fellow in cooperation with the Ensemble Gesellschaft.