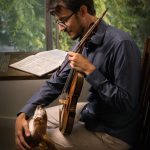 Described in the Los Angeles Times as “an explorer into the cracks of intonation and the quirks of symmetry”, LA- based composer Andrew McIntosh is known for writing music with “soundscapes rich and immersive” (San Francisco Classical Voice) and “lavish cascades of colorful sound” (LA Times). His music is regularly performed in the US and Europe and has been featured at major venues in The Netherlands, Germany, Austria, Switzerland, England, Los Angeles, and New York, including several recent performances at the Los Angeles Philharmonic’s Green Umbrella series in Walt Disney Concert Hall and at Monday Evening Concerts in Zipper Hall (Los Angeles). He is also one of the six composers of The Industry’s internationally-acclaimed mobile opera, Hopscotch. A recent album of his music on Populist Records, Hyenas in the Temples of Pleasure, has been described as “a shining example of the extraordinary music that the youngest generation of American experimentalists has to offer” (TEMPO) and has been recommended by Alex Ross of The New Yorker on his best recent releases list.

Also a frequent performer as violinist, violist, and baroque violinist, McIntosh is known for being a specialist in alternate tuning systems and for being a member of the Formalist Quartet, which is dedicated to adventurous and current repertoire and regularly performs around the US and Europe. As a solo artist he has appeared at venues such as Stanford University, REDCAT (in Walt Disney Concert Hall, Los Angeles), the Wulf (Los Angeles), Unruly Music (Milwaukee), Hamburger Klangwerktage (Hamburg), Bludenzer Tage Zeitgemasse Muzik (Austria), Moments Musicaux Aarau (Switzerland), the Pianola Museum (Amsterdam), the Hammer Museum (Los Angeles), and KPFK Pacifica Radio. He also was the viola soloist in the US premiere of Gèrard Grisey’s Les Espaces Acoustiques, for which performance the LA Times said he “played with commanding beauty”. As a chamber musician he has played in festivals, concerts, art spaces, and recordings around the world with the Formalist Quartet, Tholl/McIntosh duo, Quatuor Bozzini (Montreal), Wet Ink Ensemble (New York), Rohan de Saram, Marc Sabat, Jürg Frey, Dante Boon, and wild Up, and has recorded for New World Records, Innova, Mode Records, Populist Records, Wandelweiser Editions, hat[now] ART, Darla Records, and Care/Of Editions.

As a baroque performer McIntosh has concertized with the American Bach Soloists, Bach Collegium San Diego, Musica Angelica, LA Master Chorale, Les Surprises, Tesserae,​ Musica Pacifica, ​Preethi de Silva, and the Corona del Mar Baroque Festival. He also directs a small baroque ensemble which focuses on 17th century French and Austrian violin repertoire, in particular the complete Rosary Sonatas of Biber, and has performed at the Getty Museum, the Hammer Museum, the Santa Barbara Museum of Art, and the Museum of Jurassic Technology.

A native of rural Northern Nevada, McIntosh is currently based in the Los Angeles area where he enjoys a large and frequently unexpected variety of writing, performing, traveling, teaching, and recording activities.