UN-intermezzi are a set of solo piano pieces whose individual titles are taken from the novel Un-Lun Dun by the English writer, China Miéville. The story presents an alternate and parallel universe to the city of London. China’s writing is so wonderfully poetic that I’ve stolen (with his permission!) several of his phrases. These pieces are alternate universes to other works and musicians who have inspired me.

The first, each dreams the other, is my version of the floating quality of Brahms’ Intermezzo in B minor, Op. 119 no. 1. The second, somewhere very else…, is inspired by the gigue from Bach’s B-flat Major Partita with its energetic bounce and hand crossing. It is dedicated to the pianist Aron Kallay. The third intermezzo, a bowl for shadows… is an homage to the whimsical style of Erik Satie, specifically his fourth Gnossienne. The canonic and climbing idea of storyladder, the fourth intermezzo, takes its idea from Ligeti’s L’escalier du diable and Jeffrey Holmes’ 5 Microtonal Studies iii for guitar duo. Motives from the other 4 intermezzi make guest appearances against this ascending musical ladder that is the musical representation of China Miéville’s name. In the final intermezzo, a chorus of night-things, the night-things move between calm contemplation and energetic activity. 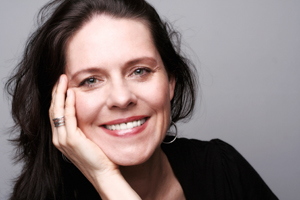 Composer Veronika Krausas has had her works performed internationally. The Globe & Mali (Toronto) writes that “her works, whose organic, lyrical sense of storytelling are supported by a rigid formal…