Psycho is thought of as an immersion device in movement:
visual movement through images of nocturnal wandering filmed in the streets of New York;
sound movement through musical sequences animated by successive polyrhythmic textures

Music and images thus follow a common partition of continuous flow and form an inseparable entity.
The musical part, written for two identical septets, arranged symmetrically, evolves according to a principle of sound stereoscopy: each musical idea materializes through different games of back and forth between the two sets, games of movement indefinitely renewed.

The reminiscences of jazz and repetitive American music, the readings of Bret Easton Ellis, the cinema of James Gray and Abel Ferrara were all the starting points of this imaginary night walk 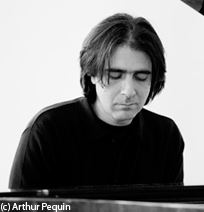