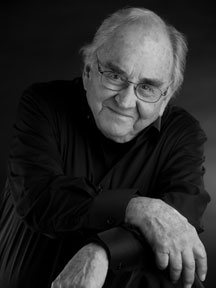 William Kraft (b. 1923, Chicago) has had a long and active career as composer, conductor, timpanist/percussionist and teacher. He is Professor Emeritus at the University of California, Santa Barbara, where he served for 11 years (1991 -2002) as Chairman of the Composition Department and Corwin Professor of Music Composition. From 1981-85, Mr. Kraft was the Los Angeles Philharmonic’s Composer-in-Residence, for the first year under Philharmonic auspices, and the subsequent three years through the Meet the Composer program. During his residency, he was appointed by executive director Ernest Fleischmann to serve as the founding director of the orchestra’s performing arm for contemporary music, the Philharmonic New Music Group. Mr. Kraft had previously been a member of the Los Angeles Philharmonic for 26 years; eight years as percussionist, and 18 as Principal Timpanist. For three seasons, he was also assistant conductor of the orchestra, and thereafter, frequent guest conductor.

During his early years in Los Angeles, he organized and directed the Los Angeles Percussion Ensemble, a group which played a vital part in premieres and recordings of works by such renowned composers as Ginastera, Harrison, Krenek, Stravinsky, and Varese. Kraft served as Stravinsky’s timpanist and percussionist in charge of all percussion activities for the composer’s Los Angeles performances and recordings. As a percussion soloist, he performed in the American premieres of Stockhausen’s Zyklus and Boulez’ Le Marteau sans Maitre, in addition to recording Histoire du soldat under Stravinsky’s direction.

Mr. Kraft has received numerous awards and commissions, including two Kennedy Center Friedheim Awards (first prize in 1990 for Veils and Variations for Horn and Orchestra, and second prize in 1984 for Concerto for Timpani and Orchestra); two Guggenheim Fellowships; two Ford Foundation commissions; fellowships from the Huntington Hartford Foundation and the National Endowment for the Arts; the American Academy and Institute of Arts and Letters Music Award; the Norlin/MacDowell Fellowship; the Club 100 Distinguished Artist of Los Angeles Award, the ASCAP Award; the NACUSA Award; the Eva Judd O’Meara Award; first place in the Contemporary Record Society competition; commissions from the Library of Congress, U.S. Air Force Band, St. Paul Chamber Orchestra, Kronos Quartet, Voices of Change, the Schoenberg Institute, consortium of Speculum Mucicae/San Francisco Contemporary Music Players/ Contemporary Music Forum, The Boston Pops Orchestra, consortium of Pacific Symphony/Spokane Symphony/Tucson Symphony, the Los Angeles Philharmonic, among others. His works have been performed by the New York Philharmonic, Boston Symphony, Chicago and Philadelphia Orchestras, the Los Angeles Philharmonic, and other major American orchestras as well as in Europe, Japan, Korea, China, Australia, Israel, and the U.S.S.R. Mr. Kraft’s Contextures: Riots – Decade ’60 (1967) has been choreographed and performed by both the Scottish National Ballet and the Minnesota Dance Company. In 1986, United Air Lines commissioned a work expressly to accompany a lumetric sculpture by Michael Hayden titled Sky’s the Limit for their pedestrian passageway at Chicago-O’Hare International Airport. In November 1990, Mr. Kraft was inducted into the Hall of Fame of the Percussive Arts Society.

Recent activities include: performances of Concerto for Timpani and Orchestra by the Dresden (Germany) Philharmonic Orchestra in Tokyo, Japan, also by the Western Australian Symphony Orchestra, Philadelphia Orchestra, Houston Symphony, Rotterdam Philharmonic, San Francisco Symphony; Red Azalea, an opera commissioned by the Modern Music Theater Troupe (London) was premiered in February 2002 at the University of California, Santa Barbara; the Concerto for English Horn and Orchestra, commissioned by the Los Angeles Philharmonic Orchestra, was premiered on January 16, 2003, with soloist Carolyn Hove and Esa-Pekka Salonen conducting. In 2005 Mr. Kraft was the Music Alive composer in residence with the San Diego Youth Symphony Orchestra. He has fulfilled residencies at the Chopin Conservatory in Warsaw, Poland, the University of Indiana (Bloomington), University of Southern Oregon (Ashland) and University of Montana (Missoula & Bozeman). Recently completed recording projects are with the Czech Philharmonic, New England Conservatory and the Royal Liverpool Philharmonic. His Second Timpani Concerto, commissioned by the San Francisco Symphony, was premiered in June 2005 with soloist David Herbert, Michael Tilson Thomas conducting.

Excerpts from his opera, Red Azalea, were performed by the New York City Opera on May 6, 2006 during their VOX Festival. The world premier of the revised version of the Timpani Concerto No. 2 took place on April 20 & 21, 2007 by the Hong Kong Philharmonic, with soloist James Boznos, Zhang Xian, conductor. This was followed by the European premier December 4th 2008, Benoit Cambreling soloist, Gabriela Churma conducting.

Beginning February 24, 2007, The Southwest Chamber Music Society embarked on a project to perform and record 14 of the 15 ENCOUNTERS pieces. The success of this project is reflected in the comments of Mark Swed, chief music critic for the Los Angeles Times, Richard Ginell, critic for the American Record Guide and Jim Svejda, program host for the classical music station KUSC. Swed; “These works serve for Kraft the way the string quartet did for Beethoven or Shostakovitch, as a kind of autobiography in chamber music”; Ginell: “An epic body of work comparable to the Berio’s Sequenzas”; Svejda: “No one with the slightest interest in the music of out time can afford to be without this cornerstone of American chamber music.”

On October 24th, 2009, Mr. Kraft was given The Forte Award for distinguished achievement in advancing modern music in Los Angeles.