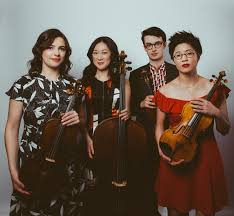 The Argus Quartet is dedicated to celebrating the artistic landscape of our time by drawing unexpected connections across styles and centuries in order to foster community amongst performers, audiences, and composers alike. Praised for playing with “supreme melodic control and total authority” and “decided dramatic impact” (Calgary Herald), the Quartet has quickly emerged as one of today’s most dynamic and versatile ensembles, winning First Prize at both the 2017 M-Prize Chamber Arts Competition and the 2017 Concert Artists Guild Victor Elmaleh Competition.

Since then, increasingly busy concert seasons have taken Argus to some of the country’s most prestigious venues and festivals, including Carnegie’s Weill and Zankel Halls, Lincoln Center’s Alice Tully Hall, Chamber Music Society of Detroit, the Ravinia Festival, the Albany Symphony’s American Music Festival, and Music Academy of the West. Highlights of the 2019-20 season include debut performances for Washington Performing Arts at the Kennedy Center and Lincoln Center’s Great Performers series, along with a return engagement in New York for the Schneider Concerts at the New School.

From 2015-17, the Quartet served as the Fellowship Quartet in Residence at the Yale School of Music under the guidance of the Brentano Quartet, and from 2017-19 held the position of Graduate Resident String Quartet at the Juilliard School, where they worked closely with the Juilliard String Quartet. They have also held residencies at New Music on the Point, working with the JACK Quartet, and at the Caramoor Center for Music and the Arts as the Ernst Stiefel Quartet in Residence.

Education and outreach are an important part of the Argus Quartet’s mission. The Quartet has worked with students through residencies and masterclasses at Yale and Princeton, James Madison University, Rockport Music, the Milken School, the Young Musicians Foundation, California State University Long Beach, and Los Angeles City College.

Based in New York City, the Quartet was founded in Los Angeles in 2013, where its members shared many meals at their favorite taco truck on Argus Drive.