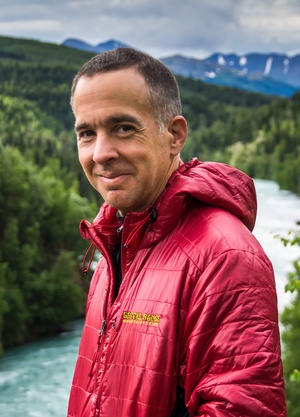 The music of adventurer-composer Stephen Lias (b. 1966) is regularly performed in concert and recital throughout the United States and abroad by soloists and ensembles including the Arianna Quartet, the Anchorage Symphony, the Oasis Quartet, the Fairbanks Summer Arts Festival Orchestra, the Ensamble de Trompetas Simón Bolívar, the Boulder Philharmonic, and the Russian String Orchestra. His music is published by ALRY Publications, Alias Press, and Warwick Music, and appears on compact discs from Centaur Records, Teal Creek Music, Mark Records, and Parma Records. His pieces are regularly featured at major national and international conferences including the International Trumpet Guild, the North American Saxophone Alliance, and the ISCM World Music Days. Lias is also active as a composer of theatrical incidental music and served for eleven years as Composer in Residence and Music Director at the Texas Shakespeare Festival.

Recently, Stephen’s passion for wilderness and outdoor pursuits has led to a sizable series of works about the national parks of the US. He has served as Artist-in-Residence at Rocky Mountain, Glacier, Denali, Glacier Bay, Bering Land Bridge, and Gates of the Arctic National Parks, and has written over a dozen park-related pieces that have been performed in such far-flung places as Colorado, New Hampshire, Texas, Alaska, Sydney, and Taiwan. Upcoming performances are planned for Washington D.C., Rochester NY, and Houston, TX. Among his current projects is a new commission from the Boulder Philharmonic (funded by the National Endowment for the Arts) to create an original piece inspired by Rocky Mountain National Park. He is the founder and leader of Alaska Geographic’s annual “Composing in the Wilderness” field seminar.

Stephen Lias received degrees from Messiah College, Stephen F. Austin State University, and Louisiana State University. He is a Distinguished Arts Associate of Sigma Alpha Iota International Music Fraternity and a member of ASCAP, NACUSA, the College Music Society, the Society of Composers, Inc, and the American Composers Forum. He is the Texas delegate to the International Society of Contemporary Music. He currently resides in Nacogdoches, Texas where he is Professor of Composition at Stephen F. Austin State University.