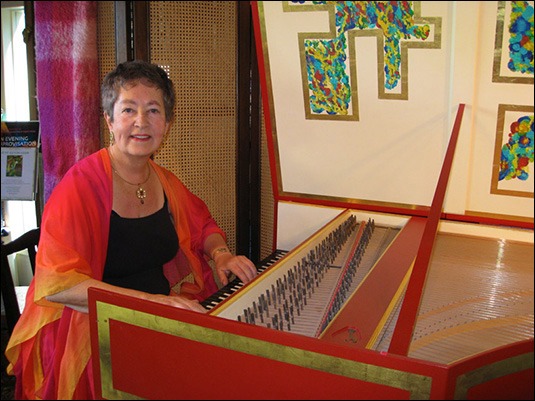 Professionally trained and experienced as both musician and attorney, also an enthusiastic history buff, Sally Mosher studied music at Manhattanville College, New York and USC School of Music, subsequently obtaining a Juris Doctor from USC Law School. She is a member of the California Bar.

From early youth, Sally trained as a pianist, and her work experience included performing, teaching, and newspaper music criticism. Later embracing the harpsichord, Sally has been active as both composer and recitalist. Her compositions have been performed at distinguished venues, including the United States Library of Congress.

For real estate and other investment activities, Sally established the business entity, Oakhill Enterprises. Aside from appropriateness for real estate, Oakhill translates her Swedish surname, Ekenberg.

Since childhood, Sally has created art, and for the past twenty years has produced more than 200 paintings, some of them publicly exhibited at notable venues. Her acrylic canvases are radiant with bold colors and abstract shapes.

Always interested in 16th century history, Sally is author of the book People and Their Contexts: A Chronology of the 16th Century World, which was awarded the Vero Nihil Verius Award from the Shakespeare Authorship Research Center of Concordia University in 2011.