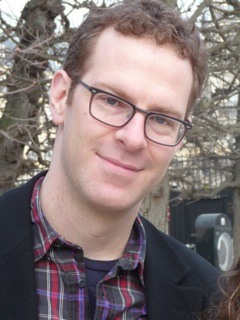 Robinson McClellan is a composer, teacher, scholar, and concert presenter. Audiences have heard his music via commissions, performers and venues such as the Albany, Ft. Worth, and Knox-Galesburg Symphonies, the Museum of Biblical Art (NYC), Amsterdam’s Gaudeamus Competition, the Monteverdi Kamerkoor Utrecht, Yale Schola Cantorum, the Hudson Opera House, Macalester Concert Choir, Moira Smiley and VOCO, Trio Eos, and many others. He has received residencies and awards from the MacDowell Colony, Yaddo, the American Academy of Arts and Letters, ASCAP, and Vassar College.

His choral music is published by E.C. Schirmer, See-a-Dot Music Publishing, in the hymnal Music by Heart and its ‘selections from’ subsequent edition Singing in Community: Paperless Music for Worship, and in the Justice Choir Songbook.

Robin earned his doctorate in composition (DMA) at the Yale School of Music and the Yale Institute of Sacred Music, and studied music at Vassar College. His teachers have been Ingram Marshall, Ezra Laderman, Annea Lockwood, Richard Wilson, Martin Bresnick, and Aaron Jay Kernis.

As a composer and scholar he spent several years immersed in piobaireachd, a bagpiping tradition rooted in 17th-century Gaelic Scotland. His research into its unique rhythmic style was published in a scholarly anthology from Ashgate, and has been cited in the journal Ethnomusicology.

Robin is founder and director of El Salto, a forum for contemporary music heard in a context of broad-minded religious/humanist inquiry, at Yale Divinity School and the New York Society for Ethical Culture. His article about El Salto appeared in the journal Liturgy. He served as Composer in Residence for ActorCor, a NYC-based choir dedicated to bridging religious divides.

He has sung in a variety of choral ensembles, including St. Michaels Choir NYC, Yale Schola Cantorum, C4, and New York Chamber Choirs.

Robin is a music educator with a deep interest in teaching technologies and the history and practical philosophies of music notation. He is Musician Advocate for Noteflight, the online music notation program. He co-writes and teaches online music theory courses at Rutgers University. He directs ComposerCraft, an intensive course for young composers at the Kaufman Music Center in NYC. Also at Kaufman, he is on the composition faculty at the Lucy Moses School and the Special Music School. He teaches a private composition studio and is a composer mentor for YCIW and Music-COMP. He has also taught music theory, history, and world music at Hunter, Manhattan and Wagner Colleges. More about teaching…

Robin helped create The Morgan Library’s Music Manuscripts Online. He has been Music Librarian at the Kaufman Music Center, Managing Director for the S.E.M. Ensemble, and worked on the production team at G. Schirmer/AMP.

Last but not least, he is a compulsive photographer and his photos have been published twice in magazines.