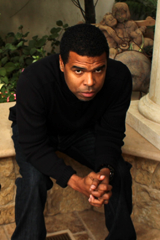 One of the most influential individuals to come into the theater world in a generation, Rickerby Hinds has the unique ability to challenge conventional notions of the stage while remaining respectful of its long history and traditions. A native of Honduras, Central America who immigrated to South Central Los Angeles at age 13, Hinds’ Daze to Come changed the dramatic arts forever when it debuted in 1989. The first ever full-length play to use the founding elements of hip hop as the primary language of the stage, Daze introduced the genre of hip hop theater to the world. Self-marketed and self-produced, its story of a rap community forced into exile was both raw and inspiring. Daze To Come and Hinds’ subsequent works have empowered an entire school of young playwrights to speak to the world in the language of hip hop.

Possessing an MFA in playwriting from UCLA’s School of Theater, Film and Television where he was twice awarded the Audrey Skirball-Kenis (ASK) Award for best play, Hinds’ visionary creations span the gamut of human emotions and experiences. Blackballin’, which received a reading at London’s Royal Court Theatre, examines the issue of race and history in American sports and society. The semi-autobiographical Birthmark (commissioned by Showtime to be adapted into a screenplay) explores the social and cultural conflicts of a Spanish-speaking immigrant of African-descent forced to choose between the limiting racial categories offered within American society. In One Size Fits All, Hinds tackles the global issue of the exploitation of children by tracing the life of an athletic sneaker from its creation in an Indonesian sweatshop, to the ghettos of America, to the sugar cane fields of the Dominican Republic, and finally to the feet of a child soldier in Eastern Europe.

In addition to his mission to open up the theater to a diversity of voices and experiences, Hinds is driven to bring the theater to new audiences. In Straight From Tha Underground he examines the issue of freedom by chronicling the experiences of a B-Boy from Compton who is mystically transported back to 1863. Having played in venues as disparate as university theaters, churches, community centers, and national conferences, Underground highlights Hinds’ ability to craft stories and dialogue that impact audiences across racial, educational, economic and generational lines. In Keep Hedz Ringin’, an adaptation of Richard Wagner’s Ring Cycle, Hinds makes the ultimate connection between tradition and innovation-demonstrating that hip hop culture and expression, like grand opera, has the ability to elevate both its practitioners and its audiences to unprecedented heights of human understanding. Encompassing both mission and vision, Hedz epitomizes Hinds’ belief in what theater can accomplish when approached from a truly inclusive starting point. Dreamscape employs DJing and spoken word to explore the life of a young African American girl as she is shot to death by police officers. Finally Buckworld One tackles the age-old question of our existence and purpose on earth. From the universal to the individual to the relationship between fathers and sons to our search for God, this production attempts to tell this expansive story through dance (Krump), spoken word, and historical video footage in a multi-media presentation.