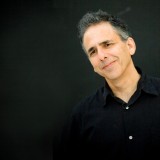 Michael Gordon’s music merges subtle rhythmic invention with incredible power embodying, in the words of The New Yorker’s Alex Ross, “the fury of punk rock, the nervous brilliance of free jazz and the intransigence of classical modernism.”

Transcending categorization, his music represents the collision of mysterious introspection and brutal directness.

This season, cellist Ashley Bathgate premieres a solo to be performed inside houses, the Amsterdam Cello Octet premieres the latest addition to Gordon’s concert-length music for multiples, the Theatre of Voices premiere A Western, and The Crossing choir gives a preview of a multi-year project with film by Bill Morrison: Montaña.

Gordon’s recent works include a new chamber version of his opera Acquanetta, commissioned/premiered by Beth Morrison’s Prototype Festival in NYC; Big Space, commissioned and presented by the BBC Proms; a concert-length work for choir, Anonymous Man, commissioned/premiered by The Crossing, and three new works for orchestra — Natural History, written for the 100th Anniversary of the United States’ National Parks and premiered at Crater Lake in Oregon; Observations on Air, a concerto for bassoon for soloist Peter Whelan, commissioned by The Orchestra of the Age of Enlightenment; and The Unchanging Sea, a piano concerto for Tomoko Mukaiyama with a new film by Bill Morrison commissioned/premiered by the Seattle Symphony and the Rotterdam Symphony. Gordon and Morrison’s other collaborations include the Decasia, Dystopia, Gotham and El Sol Caliente.