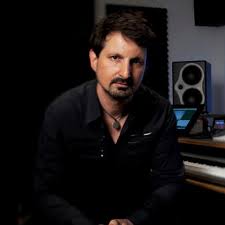 JEFF RONA is an accomplished and award-winning contemporary composer for film, TV, and video games, as well as a recording artist and producer. He studied music, art, and photography, but left school to pursue music as his life’s work

Rona became an in-demand studio musician, arranger, sound designer, synthesist, and music programmer working in Los Angeles and New York. Among his projects, he recorded and performed as a member of Jon Hassell’s highly regarded group, co-composing and producing the acclaimed “City-Works Of Fiction” record for Opal//Warp Records, and touring and performing with legendary producer Brian Eno.
After working with legendary record producers such as Maurice White, David Foster, Albhy Galuten, Malcolm Cecil and dozens of others, he focused his efforts on film music, most notably collaborating with Philip Glass, Mark Isham, Lisa Gerrard, Basil Poledouris, and longstanding musical relationships with composers Hans Zimmer and Cliff Martinez. Rona collaborated on dozens of films before landing his first solo composing project, scoring the groundbreaking television series “Homicide: Life On The Street” for director Barry Levinson, which launched his successful musical career. Rona’s music has been described as a unique and savvy use of electronics with orchestral and world musicians, taking inspiration from minimalism, EDM, 20th Century orchestral and pop music and blending them into a personal and recognizable style.

He has toured with Lisa Gerrard (solo) and Dead Can Dance, orchestrating and conducting a symphony orchestra and adding his own music to the concerts. He composed music for the 2008 Beijing Olympic games, including live symphonic performances throughout Asia.

As a committed and passionate protector of animal rights and global ecology, Jeff has given time to score several landmark documentary films, most notably collaborating with Canadian filmmaker and activist Rob Stewart, whose film “Sharkwater” lead to the near global ban on shark finning.

Rona’s music appears in numerous Oscar, Peabody, BAFTA and Emmy award-winning projects, as well as countless film festival honors around the world. He is a three-time recipient of the ASCAP Film and Television Music Award and has authored several successful books on music.

He has released several soundtrack albums. His first solo album, “PROJECTOR” was released in 2017 to excellent reviews and reception.

Prior to becoming an established composer, he was closely involved in a number of creative & technical aspects of electronic music. Jeff was a key figure in the development of musical software and new instrument design, and was a leader in making MIDI a groundbreaking world-wide phenomenon. He was a guest speaker on technology and creativity at the first TED Conference. Jeff chronicled his experiences in the film music world in his popular book The Reel World. He is an artist-in-residence at the Aspen Music Festival, and often speaks on film music.