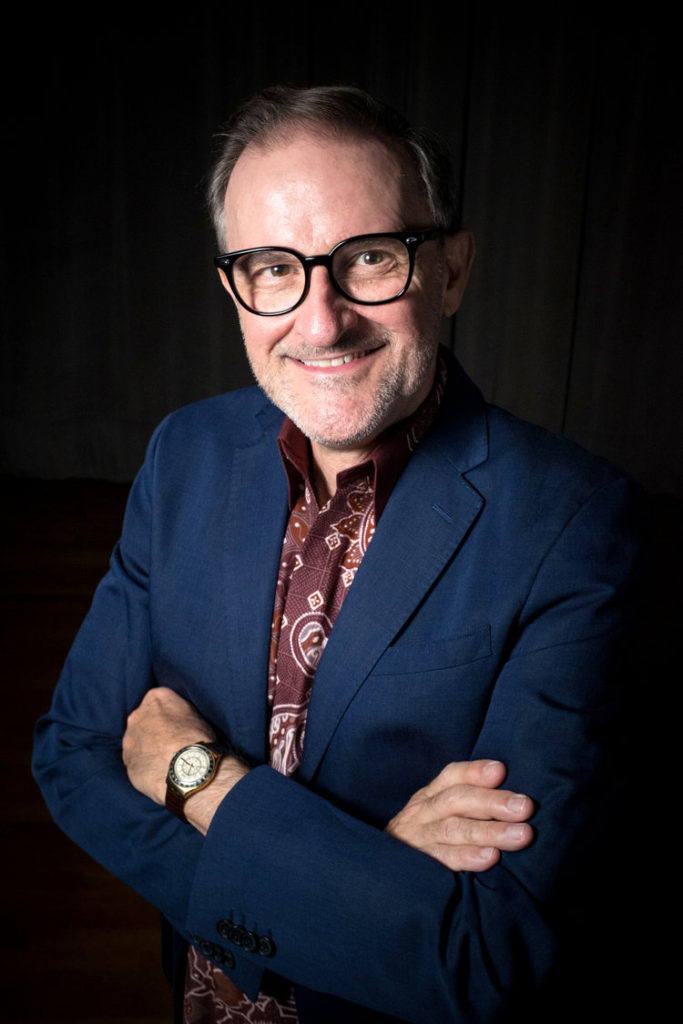 David Rosenboom is a composer-performer, interdisciplinary artist, author and educator, known as a pioneer in American experimental music.

Since the 1960s David Rosenboom (b. 1947) has explored the spontaneous evolution of musical forms, languages for improvisation, new techniques in scoring for ensembles, multi-disciplinary composition and performance, cross-cultural collaborations, performance art and literature, interactive multi-media and new instrument technologies, generative algorithmic systems, art-science research and philosophy, and extended musical interface with the human nervous system. His work is widely distributed and presented around the world.

Rosenboom holds the Richard Seaver Distinguished Chair in Music in The Herb Alpert School of Music at California Institute of the Arts, where he has been Dean of the School of Music since 1990, a conductor with the New Century Players, Co­-Director of the Center for Experiments in Art, Information and Technology, and board member of the Center for New Performance. In 2011 he also served as Acting Co-President for CalArts. He taught at Mills College from 1979 to 1990, held the Darius Milhaud Chair, was Professor of Music, Head of the Music Department, and Director of the Center for Contemporary Music. In the 1970s he was founding faculty and a professor in the Music Department at York University in Toronto. His independent career outside institutions has spanned international performance and composition, consulting, recording, writing, instrument design, interdisciplinary research, and multi-media production.

He studied at the University of Illinois with Salvatore Martirano, Lejaren Hiller, Kenneth Gaburo, Gordon Binkerd, Bernard Goodman, Paul Rolland, Jack McKenzie, Soulima Stravinsky and John Garvey among others and was later awarded the George A. Miller Professorship as a visiting artist there. He has also worked and taught in innovative institutions, such as the Center for Creative and Performing Arts at the State University of New York in Buffalo, New York’s Electric Circus, New York University, Banff Center for the Arts, Simon Fraser University, Aesthetic Research Centre of Canada, San Francisco Art Institute, California College of Arts and Crafts, Bard College, Center for Advanced Musical Studies at Chosen Vale, and Ionian University in Greece.

Rosenboom is author of influential books such as Biofeedback and the Arts and Extended Musical Interface with the Human Nervous System and many articles and monographs, such as Propositional Music: On Emergent Properties in Morphogenesis and the Evolution of Music and Collapsing Distinctions: Interacting within Fields of Intelligence on Interstellar Scales and Parallel Musical Models. He is also co­author with Phil Burk and Larry Polansky of the widely used software environment for experimental music, HMSL (Hierarchical Music Specification Language). Currently, he is working on a book about compositional models and exploring the universe through experimental music, entitled Propositional Music, a variety of recordings and new musical projects.

His work is widely presented around the world. Recent highlights have included a fifty-year retrospective of his music presented in a series of performances at the new Whitney Museum of American Art in New York (2015), a six-month exhibition of his work with brainwave music at Centre Pompidou-Metz in France (2015-2016), a four-month exhibition of his work in computer music at Whitechapel Gallery in London (2015-2016), a retrospective of his music for piano(s) at Tokyo Opera City Recital Hall (2016), the premiere of his Nothingness is Unstable, a work for electronics, acoustic sources and 3-dimentional sound diffusion at ISSUE Project Room in Brooklyn (2017), and numerous publications, recordings, festival performances and keynote speeches at international conferences. Following his retrospective at the Whitney Museum, he was lauded in The New York Times as an “avatar of experimental music.”

David Rosenboom is a Yamaha Artist.