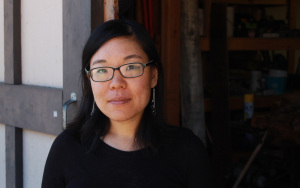 Carolyn Chen has made music for supermarket, demolition district, and the dark. Her work reconfigures the everyday to retune habits of our ears, through sound, text, light, image, and movement. For over a decade her studies of the guqin, the Chinese 7-string zither traditionally played for private meditation in nature, has informed her thinking on listening in social spaces. Recent projects include a marble chase and commissions for Klangforum Wien and the LA Phil New Music Group.

Her writing appears in MusikTexte, Experimental Music Yearbook, and New Centennial Review. Chen earned a Ph.D. in music from UC San Diego, and a M.A. in Modern Thought and Literature and B.A. in music from Stanford University, with an honors thesis on free improvisation and radical politics. She lives in Los Angeles.