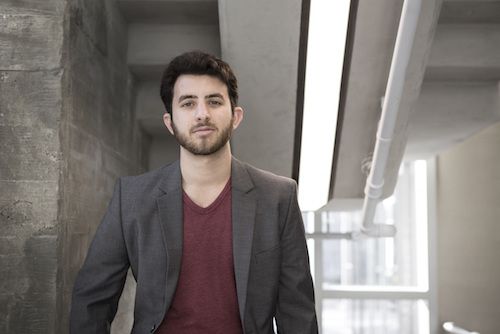 Anthony Paul Garcia (b. 1986) is a native of Chandler, Arizona and has been composing since the age of 15. An avid lover of both pop and academic music, his work falls somewhere in between the two while often incorporating electronics and speech with traditional instruments.

His works have been performed throughout the country and he is fortunate to have received premieres and commissions from numerous wonderful performers and ensembles. Most recently, many of his works have been premiered by the Now Hear Ensemble in which he is a performer and helped found in early 2012. His newest work, At Any Point (2016) – an interactive piece for viola, chamber ensemble, and live video and electronics – was commissioned by and written for Dr. Jonathan Morgan and will premier by the Now Hear Ensemble on a concert of Anthony’s works in early March 2016. Renowned recorder player and lover of new music Lucia Mense premiered his piece Slow Burn for recorders and live electronics in 2014. In the same year, his piece Smack The Wrist Good for guitar duo and live speech was premiered by new music titans the Ignition Duo. Revised in 2015, his eclectic work, If It Stops, for chamber ensemble and electronics was premiered in 2013 by the Now Hear Ensemble. In 2011, his work The Trellstio Rag, commissioned by Tyler Stell, received the first prize in the “Percussion” category in the Sherrill C. Corwin awards. In the same competition, Anthony was also awarded second place in the “Electroacoustic” category for his piece Carte Blanche. Anthony also received regular commissions from choir director Bill Bruce in the years of 2006-2009, the resulting three works were premiered in Michigan by one of Mr. Bruce’s top choirs. In 2007, his work String Theory received its first performance from the St. Lawrence String Quartet. In the following year he was commissioned by Dr. JB Smith and Sam Pilafian, resulting in his work Soul’d Out which was premiered in the same year by the duo.

Anthony has had the privilege of working with many excellent composition instructors. In his schooling he has studied both composition and various computer programming languages with Joel Feigin, Clarence Barlow, Curtis Roads, Matt Wright, Jeremy Haladyna, Jody Rockmaker, Glen Hackbarth, and James DeMars.

A passionate teacher and composer for younger musicians, Anthony has been closely involved with various high school and junior high music programs since 2004 throughout Arizona and California. Performances of his arrangements for band, percussion ensemble, and drumline have been awarded throughout the years, including a state championship for Casa Grande Union Highs School Percussion Ensemble in 2015. He currently teaches drumline and percussion ensemble at La Colina Jr. High in Santa Barbara California.

In addition to composing, Anthony performs both percussion and electronics with the Now Hear Ensemble with whom he has premiered and commissioned works from young composers from all over the country. The ensemble released their premier album of new works, Made in California, in 2013. He also appears on the album Mayan Time Mayan Tales, an album of works by Jeremy Haldyna.