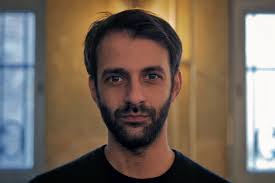 Andreas Levisianos is composer and performer from Samos island, Greece.

Having a background in classical music and focusing on contemporary practices he is interested in the interrelation of analysis, synthesis and performance through a conceptual and systemic approach.

He has performed music from different periods of the western music history and from various styles, including orchestral, chamber, solo and electroacoustic works as a conductor and pianist.He serves as the main conductor of the annual Open Days festival in Athens, Greece working with the principles of the main Greek orchestras as well as with renowned guest artists. He has also served as the conductor for the Jacaranda Concert Series in Los Angeles with a notable participation at the Noon to Midnight festival organized by the Los Angeles Philharmonic orchestra and presented at the Walt Disney Hall in Los Angeles. Further selected credits also include his conducting at the Hear Now Festival in Los Angeles, his participation as an assistant conductor for the Pulitzer prize finalist opera Invisible Cities, his curation, directing and conducting of the Jani Christou portrait concert at REDCAT, his conducting at the Anne Le Baron portrait concert in LA and more.

He has written music for various combinations of instruments, electronic and acoustic and collaborated with choreographers, directors and visual artists in a variety of intermedia projects. Selected credits include his participation in the Art Night London 2018 along with Nikolas Ventourakis in a five-hour installation/performance, his collaboration with Niko Palamares in a radio-theater composition sponsored by the Onassis Cultural Center, his participation in festivals such as Fringe in Edinburgh and Tethering in LA, his multimedia performances at the California Institute of the Arts and more.

Currently residing in London he is also working with the Universal Music Group in collaboration with IRCAM on extraction, analysis and functionality of Music Information elements.