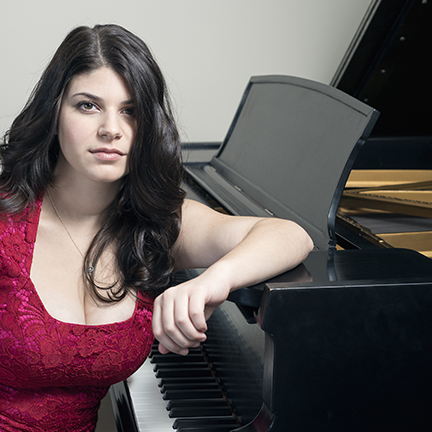 Composer Alyssa Weinberg (b. 1988) is best-known for crafting visceral, communicative scores, which have been lauded for their “frenetic yet cohesive musical language” (icareifyoulisten) and “heavyweight emotional dimensions.” (bachtrack) Alyssa finds collaboration deeply inspiring, and her music pulls concepts from her work with writers, dancers and visual artists.

A natural organizer and thought-leader in her field, Alyssa founded duende, a series for experimental dance in Philadelphia, along with cellist Gabriel Cabezas and dancer/choreographer Chloe Perkes in 2013. Duende presents events in a variety of settings and alternative venues, emphasizing equality between movement and music, with a deep exploration into the intersection of those two disciplines.

The 2018-19 season will be Weinberg’s most high-profile to date, with premieres and performances by the Minnesota Orchestra, San Diego Symphony, and Chamber Orchestra of San Antonio, as well as commissions for yMusic, the Amaranth Quartet and the New Works for Percussion Project. This season will also feature the premiere of a new cello concerto for Nicholas Finch and the NouLou Chamber Players.

Alyssa Weinberg’s music has been commissioned and performed by some of the most accomplished artists and ensembles around the world, including eighth blackbird, So Percussion, Iarla Ó Lionáird, the Aizuri Quartet, the Louisville Orchestra, and the New Jersey Symphony Orchestra, and Alyssa counts Arx Duo and Kaleidoscope Chamber Orchestra among her frequent collaborators. Alyssa has received commissions and awards from Chamber Music America, FringeArts and the Pennsylvania Ballet, the Barnes Foundation, and the Curtis Institute of Music.

Alyssa Weinberg received an Artist Diploma from the Curtis Institute of Music, an M.M. in Composition from the Manhattan School of Music, and a B.M. in Composition and Theory at Vanderbilt University. Her teachers have included Richard Danielpour, Donnacha Dennehy, Jennifer Higdon, David Ludwig, Steve Mackey, and Dan Trueman.

Weinberg is currently a doctoral fellow at Princeton University.